Picture of the Day: The Supercell

I always love looking at the photographs posted on the incredible Twisted Sifter’s blog. The weather photographs, in particular, always pique my interest. This Ryan Shepard photograph, of a Supercell thunderstorm system over Ovid, Colarado last year, just takes my breath away. Incredible, just incredible. 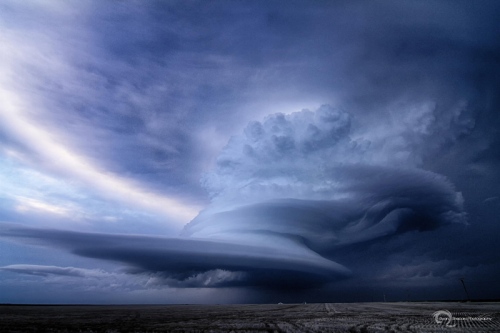 In this dramatic capture by Ryan Shepard, we see a supercell thunderstorm never Ovid, Colorado on 28 May 2013.

A supercell is a thunderstorm that is characterized by the presence of a mesocyclone: a deep, persistently rotating updraft. Of the four classifications of thunderstorms (supercell, squall line, multi-cell, and single-cell), supercells are the least common and have the potential to be the most severe. Supercells are often isolated from other thunderstorms, and can dominate the local climate up to 32 kilometres (20 mi) away. [source]

Supercells can occur anywhere in the world under the right pre-existing weather conditions, but they are most common in the Great Plains of the United States in an area known as Tornado Alley and in the plains of Argentina, Uruguay and southern Brazil. [source]

via Ryan Shepard on 500px