Interesting posting shared with us by The Extinction Protocol’s Alvin… is this happening anywhere else in the World today…. ? Food for thought.
Thank you for sharing, Alvin. 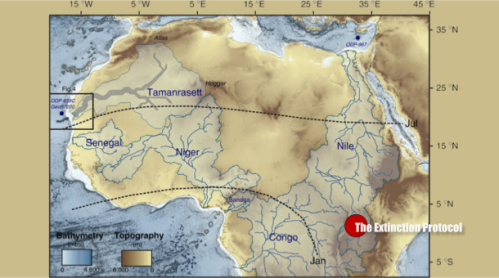 November 2015– AFRICA– A riveting mystery is unfolding in Western Sahara, as scientists discover a massive ancient underground river system with the aid of satellite imaging. It confirms that only about 5,000 years ago, the Sahara was an immensely vibrant place. The African region containing the Mauritanian Desert is roughly the size of the United States – or a quarter of Africa; so if such conditions persisted today, the river system would be the world’s 12th-largest, French-led research indicates in the journal Nature Communications.

That means a river some 500km long, with sources in the Atlas Mountains and Hoggar Highlands, in present-day Algeria. The team used hi-tech equipment aboard the Japanese Advanced Land Observing Satellite – particularly the PALSAR sensor system, capable of detailed underground imaging from space. As the river approached the coast, it carried important minerals and nutrients by way of an ancient underground canyon…