Fascinating. Pyramids? Weathered statues that, in my opinion, appear to resemble the Moai of Easter Island. In Russia. Thanks Seeker 🙂

(Note: the video did not reproduce from Seeker’s blog so I have added the link below. Thank you to Seeker for bringing my attention to this though – I recommend visiting Seeker’s original article because the comments are very interesting indeed. Certainly fascinating in every sense of the word 🙂 )

Ukrainian President requests the presence of a ‘police force’ consisting of EU member states’ peacekeeping personnel…? Only days after the implementation of the Minsk Ceasefire Agreement…? Being sent up to the region via Germany, perhaps…?
I keep remembering the cautionary words from my Sister. As mentioned before, this region is the most challenging tinderbox the World faces – and has faced – for the longest of times. The peacekeeping force – and the events surrounding their potential arrival – need to be watched closely.
Thank you to the ever-incredible Jean Haines for sharing this Russia Today article with us.

Well written, intelligent and chilling; Pepe Escobar’s observations on the current situations facing Europe – published on the always informative Russia Today website – provides us with an insight as to the situations affecting a continent – a continent fracturing apart on a daily basis. A continent that will be caught up in the midst of the most dangerous chess game facing mankind, certainly in the life cycle of this civilisation. And a change that arguably is already underway…
… thank you to Jean Haines of the ever-incredible 2012-What’s The Real Truth site for sharing this article with us.

… from my Beautiful Surrey …

Good evening from the beautiful county of Surrey…

… I apologise for the lack of blogging for the past couple of months. There is so, so much going on in the World right now… I am watching events described by my Sister and Grandfather months (even years in some instances) ago unfold. Connections that did not make sense in the context of the times, now glaringly apparent to me. The sequence of events are falling into place. For example, the Russian Connection was mentioned by my Sister 3-4 years ago. Her advice at the time – don’t believe what is said about Russia. We have chatted about the Ukrainian situation recently and she has confirmed that this was the connection to the Global Situation referenced at the time. Keep a close eye on the sudden rapid escalation of events in the Ukraine, keep a very discerning eye on Western media reports and understand that people can no longer be fooled by the same old box of deceitful tricks used by various Establishments around the World.

The Emancipation of Nations kidnapped silently by aggressors from the inside – bought and paid for by bored wealthy families with nothing to aspire to other than the total control of humanity and Mother Earth – has commenced. May not seem obvious right now but it has. Awakening from the slumbers is often unpleasant. And many of us around the World have begun our awakening, at different stages of time. “A necessity”, my Sister has mentioned in the past. There needs to be a support system in place for those who have realised that life isn’t what it seems to be – those who have been through those angry first moments of realisation and have attained a peace of mind that change can and will be effected. We have nothing to fear. The deceitful perpetrators, however… they should be fearful. Must be pretty painful not being able to trust the reflection staring back at them from the mirror…

And please don’t feel alarmed by this blog posting. We all chose to be here at this time, even if we’re not consciously aware of that choice from long ago. Compare this time of Gaia’s history to a ride on a rollercoaster… it’s going to be terrifying at certain junctions of the track, breathtaking at points… yet there will be points where the ride will temporarily glide to a halt at the very apex of the track. And the view will be so clear, so stunning. Bear this all in mind over the coming weeks and months. It is all going to be so, so worthwhile.

I have posted a beautiful picture of one of my favourite views from the Surrey Hills – Redlands at Dawn. Just seems appropriate at this time.

Good evening from a dark and chilly Surrey… 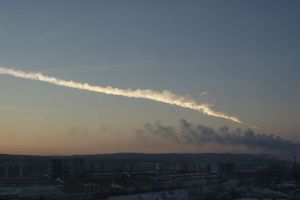 The Russian Meteor Impact of 2013 was certainly a surprise event.   The NASA article detailed above provides thoughtful reading, particularly the Comments Section.

There are, of course, some fanciful theories abound in cyberspace… a couple of examples being a)that the meteor was the true 2012 DA14 and b) was a UFO shot down by the ever vigilant Russian Military.

Whilst one cannot rule out the former with certainty, the latter?  Well, I’m not one for unrealistic conspiracy theories really.  Our Global Space Agencies did the best they could in the circumstances.  The meteor’s mass would have quite obviously been greater prior to its entry through our atmosphere.  The atmosphere performed one of its many jobs admirably, effectively melting the rock during its entry.  Fragments broke apart from the main body, the light show was incredible and the accompanying sonic boom was something not frequently heard since Concorde graced our skies. 1200 people were injured, mainly by glass fragments, and there was damage to buildings – and my heart goes out to our Russian friends. We must, however, remember that the event was a relatively benign show of galactic splendour – and yes, we are EXTREMELY fortunate that this was the case.

There has been an increase in the reports of ‘fireballs’ speeding their way across our skies in recent times, suggesting to me that the Earth – or the Solar System at large – is likely traversing its way through a congested area of the Universe at this time.

Interestingly, my Sister had mentioned 2012 DA14 last November (2012).  Her exact words were “no threat from this asteroid – enjoy the show.”  I thought her choice of words was intriguing at the time but I’m not attaching any deeper meaning to her words.  She was always beautifully adept at cutting through unnecessary verbosity in life and this trait of hers has gracefully endured since her transition.

Bearing this in mind, she has mentioned the Comet of the Century, Comet ISON…  when asked about whether the Comet poses any substantial threat to Earth?  Well.. I shall conclude this blog posting with her exact words… “… there are too many variables and I don’t want to say if it is at this stage…”